“Phyteuma ovatum” by User:Tigerente – Own work.
Licensed under CC BY-SA 3.0 via Wikimedia Commons.

Nativity: The mountains of central and southern Europe

If you were to take a hike through Transylvania (carefully avoiding the castle of Count Dracula), you might encounter the wildflower known as dark rampion.

High intensity light in that particular environment (or is it the vampiric influence?) increases the concentration of pigments in the flowers, making what might appear purple look downright black.

Rampions of several types are common in Europe, and although I’m fairly sure of the genus, I can’t say for sure that these pictures are correctly identified to species. Information on Phyteuma is hard to come by in my part of the world, and it is sparse on the web as well.

But, I know that the root of at least one species has been used as food (and still is in some parts of rural Europe).

The fairy tale Rapunzel begins with a pregnant woman craving rampion, which is growing in the garden of a witch. The woman’s husband eventually steals it for her, and she makes a salad with it and gobbles it up.

When the husband goes back to steal more, he is caught by the witch. He has to make a horrific deal with her in order to escape and take the rampion home: The baby will be hers.

So the baby is born and the witch takes her and names her after the plant her mother craved — Rapunzel (in English, Rampion).

You probably remember what’s next. The witch imprisons Rapunzel in a tower and makes her let down her long hair so she can climb up there occasionally.

Eventually, a prince comes on the scene, and charmed by Rapunzel’s singing voice, figures out how to get up to her by spying on the witch to see how she does it.

The prince then climbs up, scares Rapunzel half to death since she was expecting the witch, and after soothing her, asks her to marry him. She agrees, but how to get down from the tower? Hmm. It comes to her to weave a ladder from her hair. But in the meantime, the prince will visit every night.

Everything is going along swimmingly when the naive Rapunzel ruins a great gig by asking the witch, “Why are you so much harder to pull up here than my young prince?” Good grief, Rapunzel, Sneaky Dating 101.

The witch calls Rapunzel’s boy-hiding trick “ungodly,” and the next time the prince comes by, pretends to be the long-haired beauty herself. When the witch gives him “poisonous and evil looks,” the prince realizes what has happened, and dives out of the tower.

Young prince survives the fall, but is blinded by thorns at the bottom, where he wanders around in black grief, eating grass for a few years.

Finally, he makes it to a part of the forest where he hears a familiar sweet voice. Yes, it is Rapunzel, who apparently had left the tower pregnant with a double memento of all those “visits” (twins). It was noted that she had “lived miserably” in the woods since their traumatic separation.

She is so happy to see the prince again that she cries, and two of her tears fall into his eyes. His blindness is cured.

Now that he can see who she is, they joyfully reunite and live happily — if not ever after — for “a long time.”

Pre-Disneyfied fairy tales are fascinating, and this one has deep roots (heh), perhaps going all the way back to the 10th century.

Of course the plants go back even further. 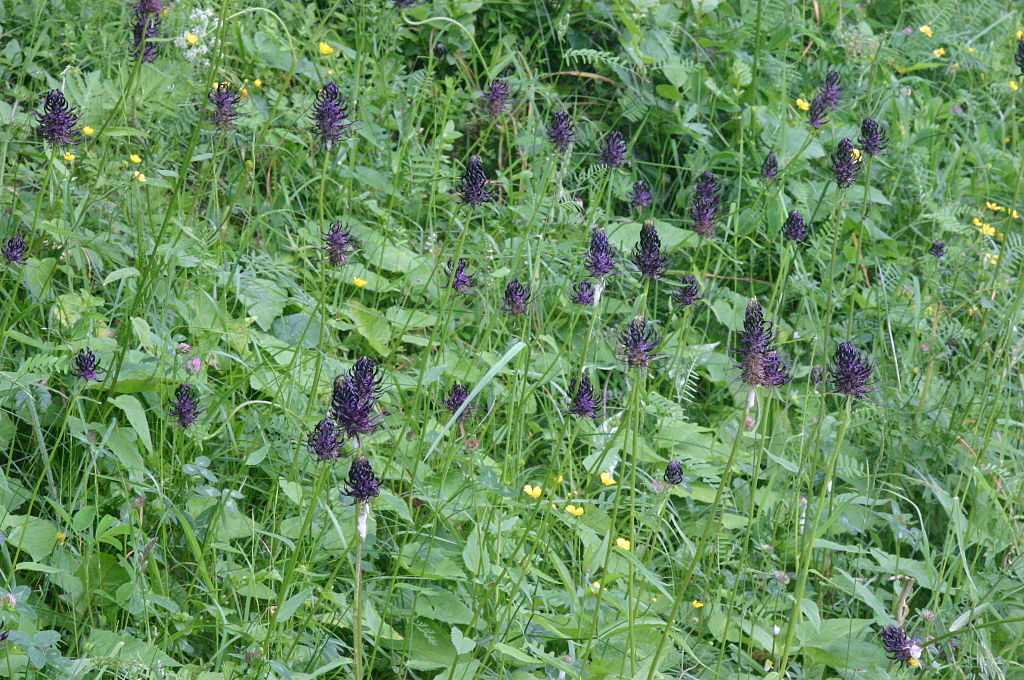